We will not be offering Spring Turkey Hunting for 2023.  Turkeys have not been plentiful the last two seasons on the Sandy Run Hunt Co. property.  Once the population rebounds, we will offer this opportunity again.

The Sandy Run property contains what the Illinois Natural Heritage Survey called the largest unharvested timber in Southern Illinois and has become an awesome turkey hunting area. The wild turkey population on our property has grown significantly in the past five years.  In previous seasons, I may have been lucky just to hear a gobble in the distance. In the past three season we are having multiple harvest opportunities in one day (sometimes you need more than one).

Kevin Diekroeger drew a fifth season, Fayette County turkey tag in spring of 2018.  Kevin has some property in Missouri where he does some turkey hunting along with several of his family members.  He also usually draws a turkey tag to hunt public ground in Illinois, but has no private ground in Illinois to hunt.  He really enjoys coming out to the Sonnemann Woods to hunt turkeys.

Kevin came out the afternoon before his season started.  He set out his ground blind.  That evening after a Sandy Run dinner, Kevin headed out into the Clubhouse Field to owl hoot trying to find where turkeys were roosting that evening.

The next morning Kevin and I headed to his blind.  I went along to try to get some video footage.  Kevin is a much better caller, so I was just there to watch and record the hunt.  As it turned out, I was just in the way.  Kevin set up his blind on the west edge of the Cabin Field, close to the big woods.  About half hour after sunrise, two different toms started gobbling from the west in the timber.  Just a bit of calling and soon they were headed our way.  Shortly after, a third tom started gobbling and coming in from the south.  That bird was focused on the decoys  and was headed in fast.  I slunked down in the blind, trying to give Kevin a shot over my lap, no video of this shot.  The big tom got to about 15 yards away when Kevin pulled the trigger, but I could see that with crowded blind and awkward direction from where the bird approached, his gun was not well seated on his shoulder.  Bang!  and then wingbeats, then some expletives, and some good-natured laughter.

We headed back to the lodge for breakfast and after a short nap, Kevin decided to try a mid-morning hunt.  He trekked off to the north west corner of the timber to the small food plot.   Kevin set up on the edge of the small open spot in the timber on his ground seat nestled up to the base of large oak.  After making a few hen clucks, being quiet and then a few more raspy hen clucks, a tom gobbled from the south deeper in the timber.  With just a bit coaxing the big gobbler worked it’s way to the edge of the opening, and this time, with his shotgun seated well against his shoulder, Kevin didn’t miss.

I came out to see his trophy and while waiting on me, Kevin found a nice pile of huge yellow morels.  We searched and found a few more mushrooms and then went back for pictures and lunch.    That afternoon Kevin did some fishing and we shot some rifles and handguns.  Little celebration that evening with dinner and after breakfast the next morning Kevin hit the road with some more turkey stories to recount.

For our initial year, we are offering 5 hunters access to the Sandy Run property for unguided, wild turkey hunts.  Hunts will include meals and lodging at the Sandy Run Clubhouse, pond fishing and mushroom hunting.  And you can get all of this for only $500.  This price is for your entire season, not just one day. 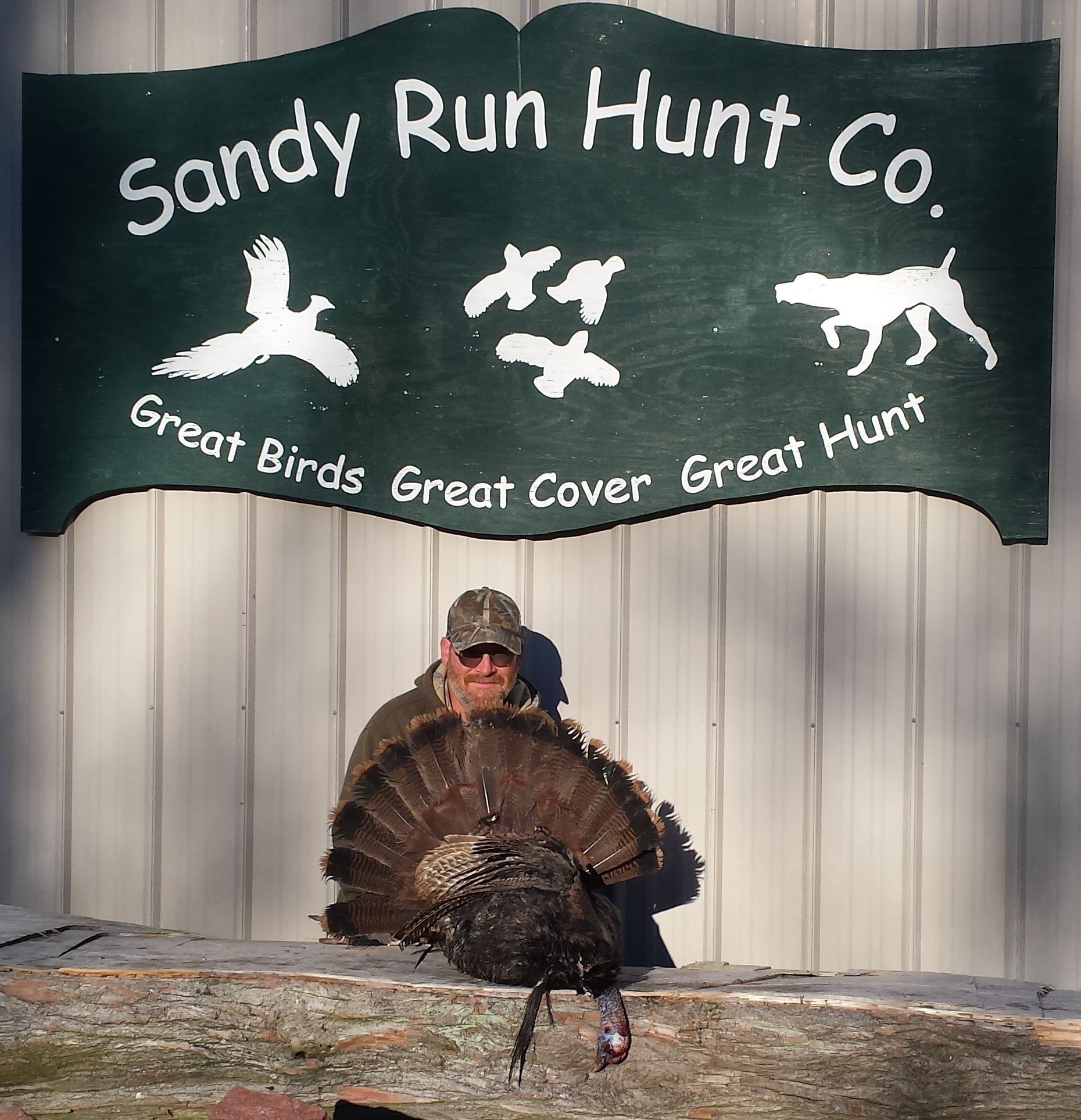 Now, the Illinois DNR has made turkey hunting a little difficult to schedule.  First of all, you will need to get into one of the lotteries to apply for a tag.  Next, you will have to pick one of the 5 seasons for your hunt.  I have had success throughout all seasons, harvesting toms in early April to early May.  All this information is in this  PDF , available at the IDNR website,  and at the bottom of this page.

If you would like to reserve a spot for the Spring 2019 season, just contact Bill with your preferred season and a $250 deposit (deposit is refundable if you are unable to obtain a permit).  As spots fill up we will adjust what seasons are available and which you should apply for.  We will not have more than two hunters for any of the five seasons.

Fayette County Spring Turkey Permits have sold out for the past several years, so be sure to get into the first lottery by December 1. Non-residents can get into the Second Lottery starting December 3rd.

OR Text Bill to Book Your Hunt