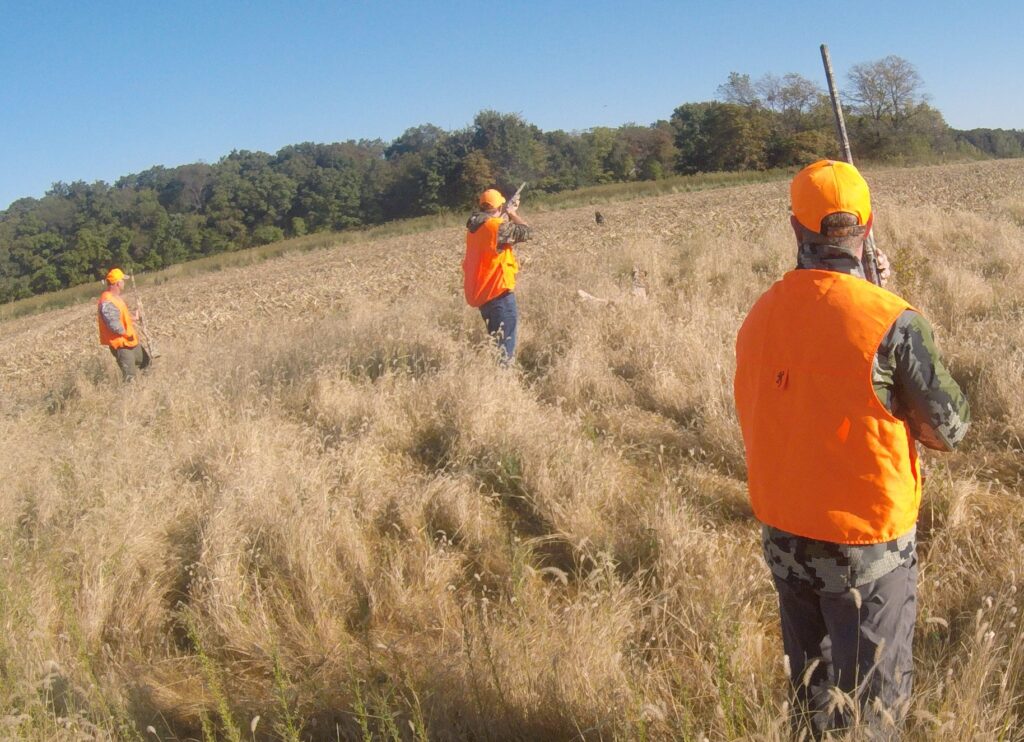 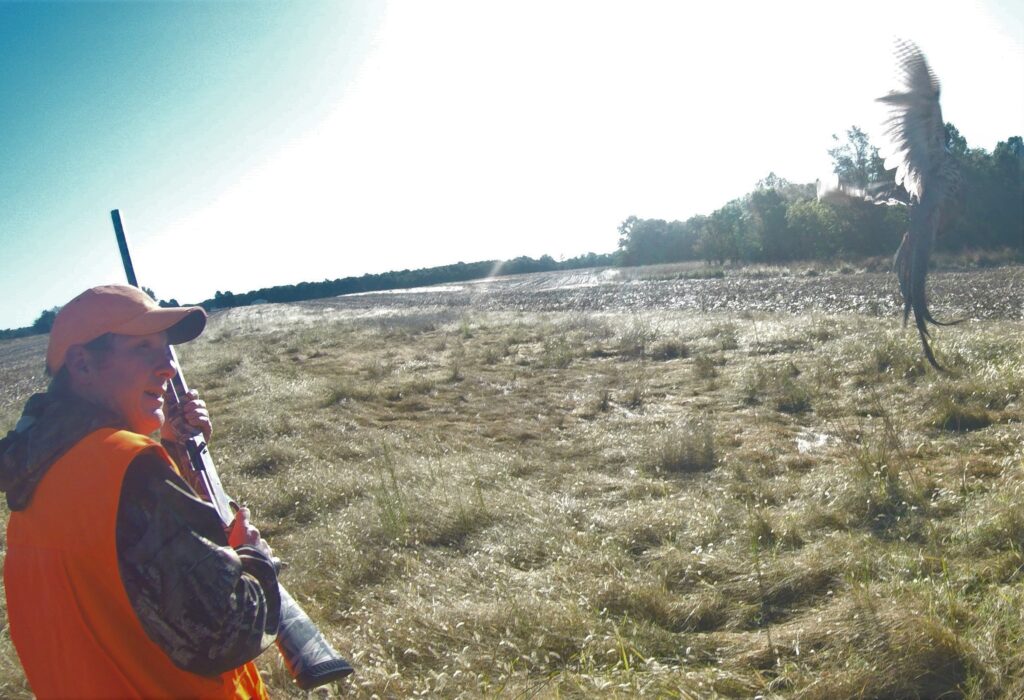 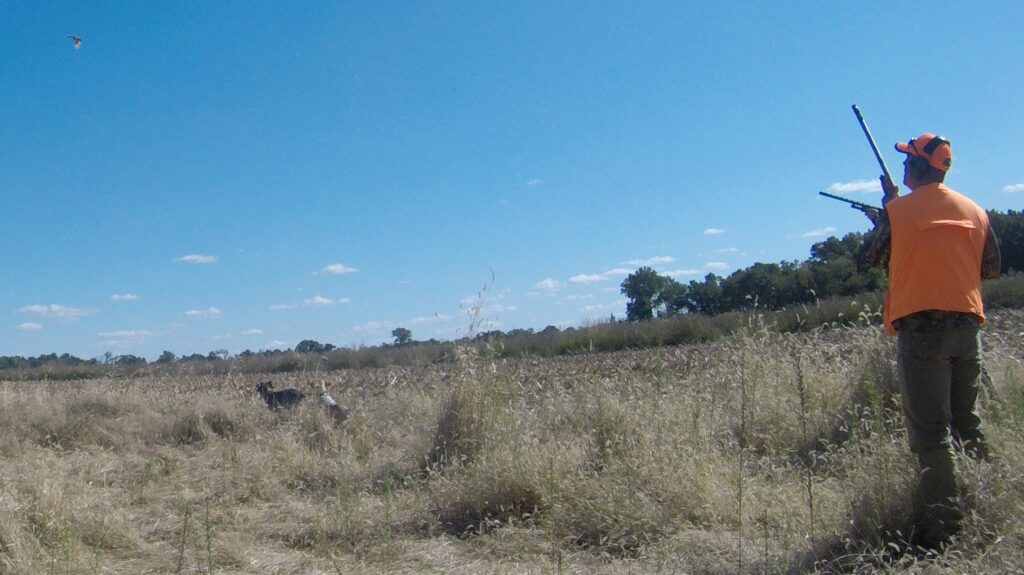 Kevin Diekroeger and I took his wirehair, Ina, out for a quail hunt Thursday morning, trying to beat a rain shower. Found two coveys in the North Tinkerfarm Field, but shot terrible. Only 4 out of 16 harvested, plus a bonus pheasant missed. Fun hunt.

Preface: I ve been reading a lot of John Steinbeck and my dog (friend) just died.

Baron jumped on to the mule seat, thats not really right because Baron never jumped up anywhere, he loped up. He was long-legged and maybe he had grown into them by his end at 11 months. I am always so enamored by the little athletic dog that leaps effortlessly into the dog crate in the back of the mule. Baron was not little , maybe athletic, too early to tell, but he mostly just stepped effortlessly into the dog crate in the mule. He also did this in just one lesson. The second time the crate in the mule was offered he stepped in, no command necessary.

Baron’s last art work came Friday morning, Baron had just plodded from the south pond. He had always preferred pond and puddle water over anything out of the hose. The Saturday before was the last time Baron had eaten. I found this out that Sunday when I came out for the evening walk, I could tell he was not feeling well.

The next morning were at the vet, near death dog in tow. Charlie, my vet, had the dire look of knowledge as he examined my pup. I think Baron holds the world’s record for the highest temperature in so short of time. Charlie recorded 107 in about 10 seconds. I think he quickly removed the thermometer in worry of overload. Blastomycosis was the obvious diagnosis. This is a common fungal infection in the Mississippi/Ohio Valley, ect. ect. , most of the Eastern U.S. One of Hildy’s last litter has had a good partial recovery from the infection. Charlie looked graven as he told of two dogs that had already died from Blasto the previous week, it is most prevalent in late summer and early autumn, bingo.

Baron and I went home with pills, instructions and good wishes. He got better. His tail was mostly broken Sunday and Monday, planted firmly between his legs. By Tuesday it went to half staff. On Wednesday the tail was at ninety degrees. He was still not eating his kibble or my leftovers, which at the time I did not wish to part with. In retrospect if he would have enjoyed them I would have given them all gratefully. Ok, I would just cook for him every night if that is what it took.

Thursday morning he jogged out looking more like a pup than an old dog. Charlie called me with the results: He did not have Blastomycosis, but another fungal infection: Histoplasmosis. Prognosis better. On that evening walk I talked Baron into a point, telling him there were birds in the area. He was good boy and obliged.

Friday morning Baron had still not eaten his beer can chicken, homemade pizza crust and cheese burgers offered the night before. These are all wirehair favorites. I let him out and he headed to the pond eventually for his morning swim and drink. He was not his usual self and tough to find in the pond, probably the third time in a week I thought I would have to take a swim to get him out. That morning his breathing had become quite labored, deep breathes that seemed to have shallow results. He followed me back to his waiting breakfast, but he loped up in my mule and just looked at me dripping and struggling for breath. So what was he saying? Help me or take me for our last ride. I took him for the former and plopped him in the truck back to see Charlie.

Dr. Durbin, Charlie, was gracious. He spared us the time of the chest x-ray after listening to his junked-up lungs. Baron had no fever, but also no breath. They gave him injections to help the inflammation and changed antibiotics and put him on an IV to help with hydration. Charlie asked me to sit there and make sure he held still which he received his first bolus of fluids. Pretty sure Charlie meant this to be my goodbye time with Baron. I stroked him and talked to him just like we were prone on the couch in the clubhouse.

Later that afternoon, I brought his remaining antifungal pills. I checked on him laying in a kennel with his IV. I don’t think he knew me, his eyes were somewhere else. The next morning I got the call that he did not survive that night.

He was good dog, quite possibly gonna be a really good to great dog. Well above average at less than a year, and I have seen a few dogs. He was gonna be the next stud for Hildy and perhaps for other bitches. He will be missed by me.

Being the cleaning person I am, his last art work will simply rub away with time, but I will still see it long after the remnants of Baron’s pond mud footprints have disappeared.

Lots of guns, lots of fun.

The Cumberland A1 Chapter of the Quail and Upland Game Alliance will be having its annual banquet on October 2nd at the Vandalia Moose Lodge.

One of the guns raffled or auctioned off will be the first Henry Golden Boy .22 Rifle with a QUGA serial number. QUGA00001.

See the flyer below for all the details and let me know if you would like for me to reserve some tickets for you at the door.

Jeff Marshall has two started dogs that will be ready to hunt this fall. One setter, one pointer. Jeff says they that both seem to be suited as walking dogs with the Setter covering a bit more ground than the pointer. Both have been shot over and like to hold point, but not completely broke. Call Jeff, 217 370-6176, for more information and pricing.

My friend Merrell Collins raised a few head of cattle this summer and is offering half or quarters for folks looking for some homegrown, no hormone, no antibiotics beef. The Black Angus were raised on grass pasture and supplemented with corn to complete their diet.

Merrell estimates that the quarter beef will dress out at around 150 lbs. and will be sold at market price plus processing costs. The cost should be around $550/quarter. Beef will be processed this fall and you can determine how you would like your half or quarter cut.

Please call Merrell, 618 292-3586, to place your order and put down a deposit. He has a limited number available of these quality, homegrown beef so please contact him soon.

This Saturday, April 24th, come and enjoy some shrooms and dads. I picked 70lb of crawfish and found a few morels to go along with some oyster, portabella and pheasant back mushrooms. Sandy Run Clubhouse at 5 pm or earlier if you want to try to find a few morels yourself.